This post contains affiliate links, which means that each click and purchase gives a small portion of the proceeds to me.

Please note: This costs you nothing extra, and helps me be able to continue my many craft and sewing projects, along with our home improvement projects!

We have been so busy working on our fence and yard lately that I’ve been putting my blog on the back burner. I apologize!

The spring weather has finally allowed us to be able to get our projects done, and we’ve also been running a lot, which takes up quite a bit of our time.

Chris is running the Ragnar race the beginning of June, so we’ve been trying to get in tons of miles outside together. He’s nice enough to run slower for me rather than train for time, which I really appreciate! I love to run with him, but am not nearly as fast as he is!

For those of you that aren’t familiar with the Ragnar, it’s a race that begins in Logan, Utah, and the finish line is in Park City, Utah. Normally, each team is made up of twelve people. However, my husband is running the Ultra Ragnar, which means his team consists of only four people. FOUR! Running just about 200 miles!!

As you can imagine, his shoes are racking up the miles lately.

And our fence project is coming along, although pretty slowly. As new builders and DIY-ers, it takes us a little bit more time. But hey, we’re learning!

Along with our endless house projects, the end of the school year and my time in third grade is wrapping up. I’m having a really hard time knowing that I won’t see my kiddos next year in the school, as I’ll be at a new school next year. And in first grade, which will be a huge change!

With the end of the school year approaching, it also means that Mother’s Day is just around the corner – this Sunday, in fact!

We started a new project in the classroom for my kids’ moms, a project that was a bit more challenging and more work than I originally anticipated.

I saw an adorable picture online of salt dough bowls made from the child’s handprint, and immediately decided that’s what we should do in the classroom for our mom’s, too!

Salt dough is pretty easy to make, but if you’re not familiar with it or don’t remember how, here’s the recipe:

**I made seven batches of this exact recipe, which is A LOT of salt!!

I started the craft by giving the kids a lump of the dough and had them flatten it on newspaper. BAD IDEA. It should have just been placed on their desk, because the newspaper stuck horribly to the dough. So much for trying to contain the mess!

I didn’t want to risk breaking the hands on my drive home, so we made these on a Friday and began our painting on Monday. They were completely dry by then!

The biggest problem with this craft was the fragility of the hands. Some of my students made their hands too thin, resulting in the fingers breaking really easily. This is where my Gorilla Superglue© came in handy!
Gorilla Super Glue Gel, 15 g

After the panic from the cracked hands subsided and they were successfully repaired, the kids were able to start painting. We love these paints in the classroom, and I recommend them highly.
Apple Barrel Acrylic Paint Set, 18 Piece (2-Ounce), PROMOABI Best Selling Colors I

These actually turned out really cute! I was pretty worried at first, which I’m sure every teacher has felt before when dealing with such a large art project being given as a gift. I hope my students’ moms enjoy them! We sure had fun making them. 🙂

These were the hands prior to being painted, while they were drying on the bowls. 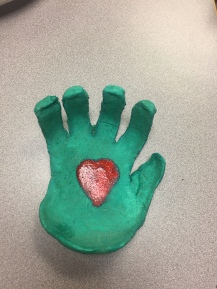 Finished hands, but still with wet paint! The kids were sooooo excited with how they turned out!

This site uses Akismet to reduce spam. Learn how your comment data is processed.